Judgmental for a day!

It is garden show season, and through some unexpected turns of events, I ended up being one of the judges of this year’s Yard, Garden, and Patio Show at the Portland Convention Center. (Thank you, William!) I always try to attend this show anyway, but this privilege made it even more fun than it usually is. For one thing, I got to walk through the show before it opened, clipboard and pen in hand, and my analytical hat on. 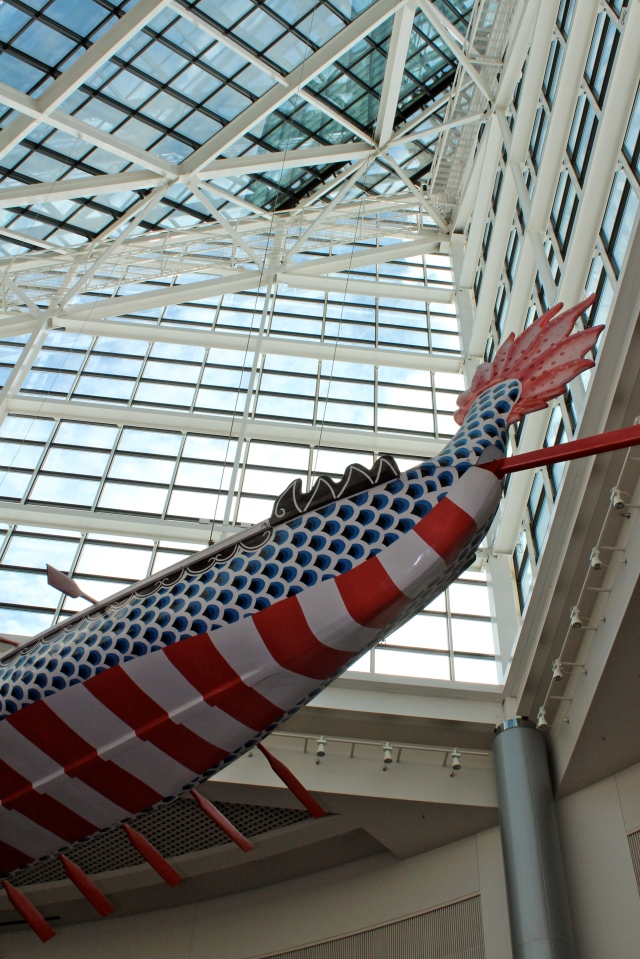 Normally, I cruise right by the stuff that doesn’t interest me. This time, being forced to look at it all critically, made me really wonder why on earth some people bother. I’m not sure what the charge per square foot is, but surely – if you invest the money – you’d think that a little time and creative thought would be a wise move, supportive of that investment. Here I was, with a list in hand that told me in which isle I was supposed to find the booth of ‘X’, and several times found myself – completely befuddled – standing in the isle, not able to find the booth in question – they were so unassuming. I imagine the last thing you want to be at an event like this, is unassuming. If it were me, I would try to be as noticeable as possible. Some booths weren’t even marked! Bear in mind – this was less than an hour before the show opened. The great majority fell in the “Needs work” category, but thankfully, there were a few highlights.

My category was Structures and Furniture, and the four criteria within each category were; 1) Uniqueness, 2) Creativity, 3) Flow, and 4) Clarity in representation. Sad to say, with very few exceptions, the Creativity in furniture was truly lacking at this show. Seriously – how many clunky wooden slides does the world really need? Good grief… I think I counted three vendors that offered the exact same thing. If there were indeed differences, they were not easily discerned.

Fun faces carved out of bamboo in the Bamboo Craftsman Co.’s booth. 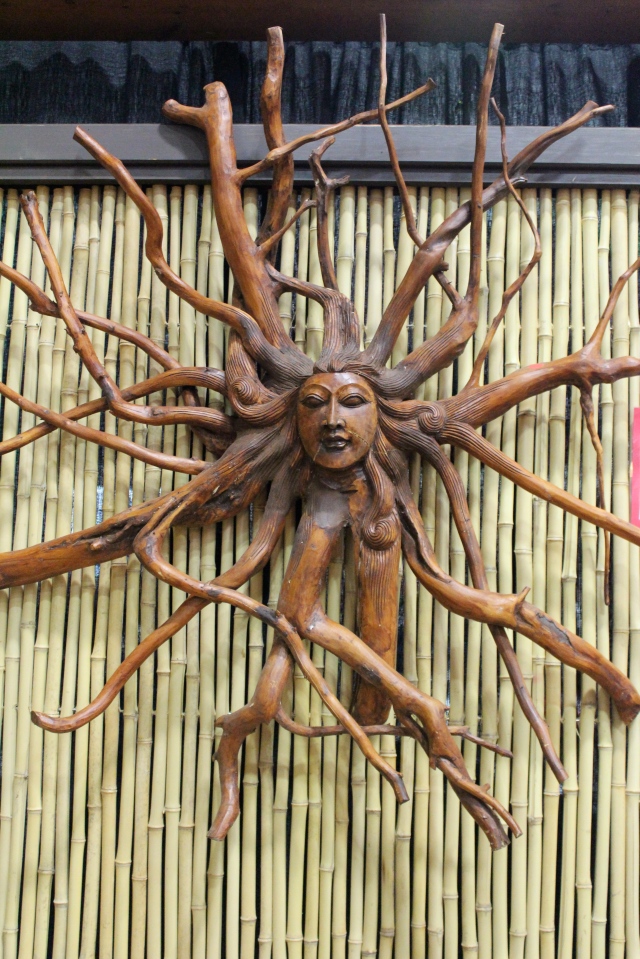 They were one of the few companies that got a rather high ranking from me. Once I and my fellow judges tallied up our numbers, they were only two points away from grabbing the gold.

I remember these fun “plants” from the Seattle show a couple of weeks ago. So fun…

Last year, I suggested the company I work for use these concrete “wooden” planks in our display for a show we took part in – unfortunately to no avail. Too bad. After this year’s YGP show, they are no longer a novelty – they were EVERYWHERE! I still think they are super-cool, but alas – by now they are well on their way to becoming mainstream. Even so, check them out here at Roxblock’s website.

Oh well, with the judging behind us, I met up with my friend Laura, and we explored the show together.

Here she is – suitably in the Urban Edible Garden. Laura is the food and garden writer for The Columbian newspaper, so visiting this garden was a must!

I like how the lights of the convention center ceiling are reflected in the pool. I also like that at the YGP – as opposed to at Seattle’s NWFGS – you are invited to walk through the display gardens. It really does make a big difference in how you perceive them.

The boiling waters of this pool made me feel the dread of a lobster, destined for the dinner table.

Case in point that designers often don’t know much about retail. A tiny little step down – which in your garden might define space or navigate topographical changes, and will soon become second nature to you – will become an instant trip hazard in a retail environment. I understand the reasoning behind putting the step in, but having to put that signed ramp there totally defeated the purpose of design swaggery. 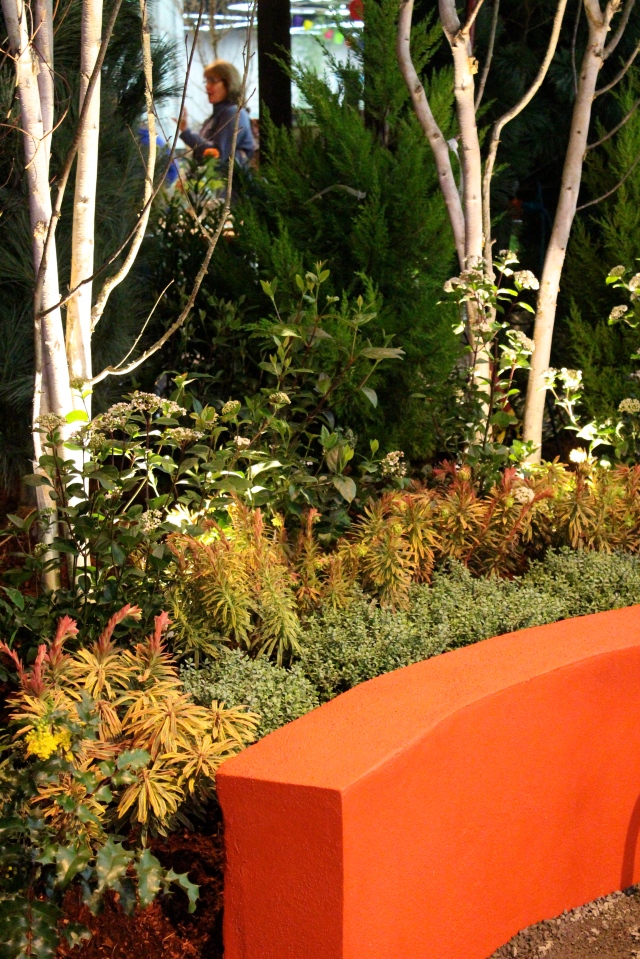 I liked the orange wall in this display, even though I thought it ended just a little bit prematurely.

The ‘Cousin Itt” plant (in the foreground) and the Edgeworthia (blooming in the background) were both abundantly represented this year. Through the forces of marketing, it seems both of them have now hit Main Street – both here and in Seattle. Edgeworthia has been one of those somewhat hard to find shrubs for years (meaning you’d have to go to specialty nurseries to find them). Based on its popularity at the two shows I’ve visited this year, it has either gone mainstream, or designers have decided to showcase the fare of the smaller, specialty growers. (I hope it is the latter one – there are so many small and unique growers out there that are worthy of our continuing patronage.) The Acacia cognata ‘Cousin Itt” is a relatively new plant. It was developed from a chance seedling in Australia in 2000, and arrived in the US in 2010. This year seems to be its coming-out year. It’s a great plant, but I’m pretty sure I killed mine this winter. I dug it up and brought it inside when we had our Arctic spike in November, (it’s only hardy to 15*F) and subsequently forgot to water it.  Damn! I’m going to give it a chance to resprout outside, but I’m almost sure it’s a gonner… 😦 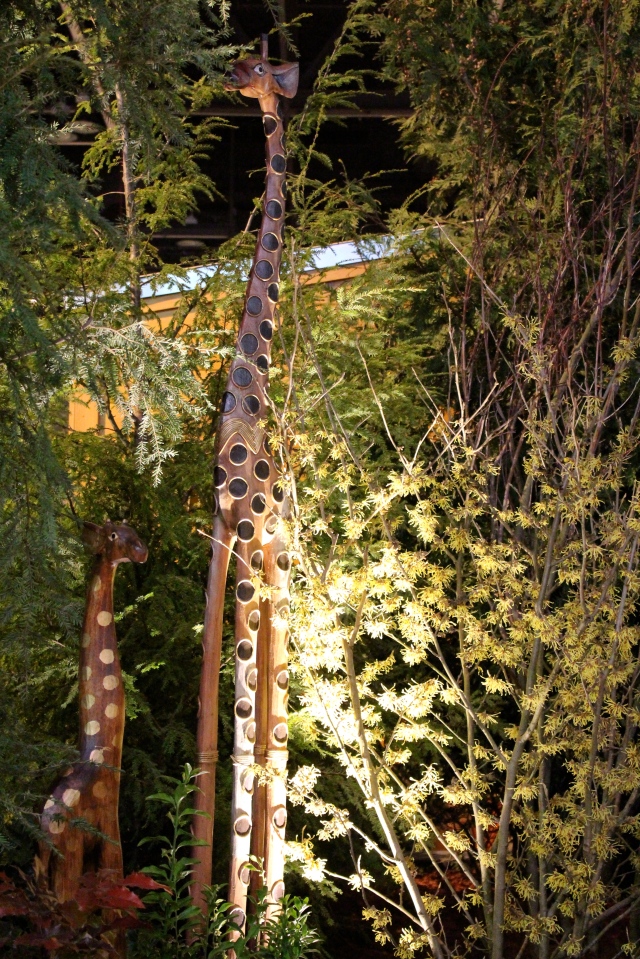 I liked the giraffes! 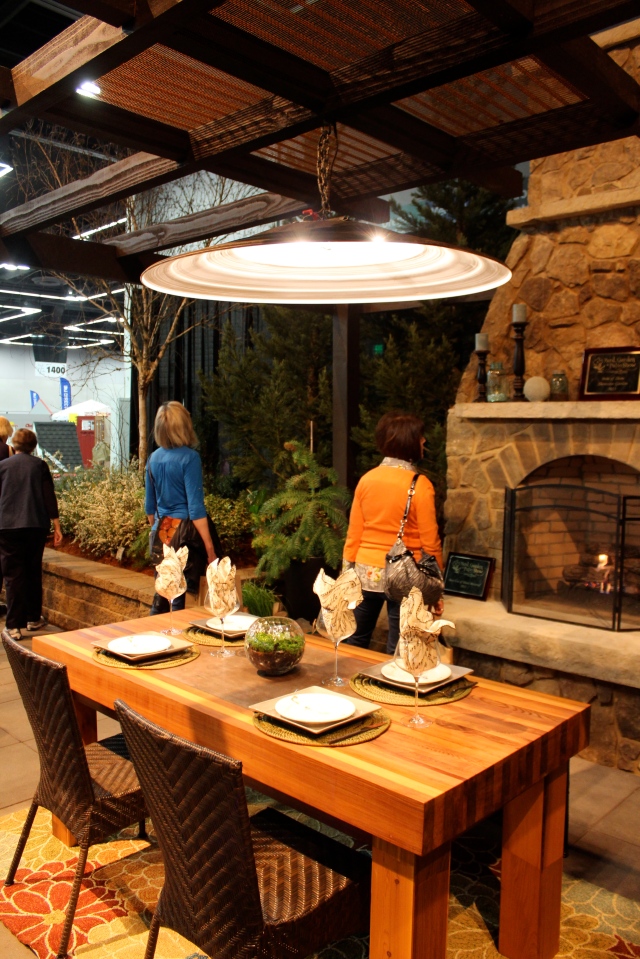 Check out that massive light fixture!

I liked the texture of the reed ceiling, even if it isn’t the most durable of choices. Looks good while it lasts, though.

Weathered steel planters – actually weathered steel in general – were in vogue throughout the show. Here nicely contrasted with Pittosporum ‘Marjory Channon’ (I think).

I love the effect of the drips trickling down the surface. I bet you they just took a spray bottle with salt water to get it to rust this way for the show. Once outside, though, material like this will soon even out to a nice, even rusty texture – unless you seal it, of course. But for an event like this, it’s stellar! Rusty steel is most definitely the rage.If you are interested, you can read more about it here.

A more free-form rusty creation – like an octopus tentacle reaching outl Love it!

I liked the elegant simplicity of this rebar screen. Nice!

Here more rebar was used to keep show visitors out of trouble. Or perhaps the intent was aesthetic? I like the visual effect, but I have to wonder if it was born out of looks, or the need for idiot-proofing. 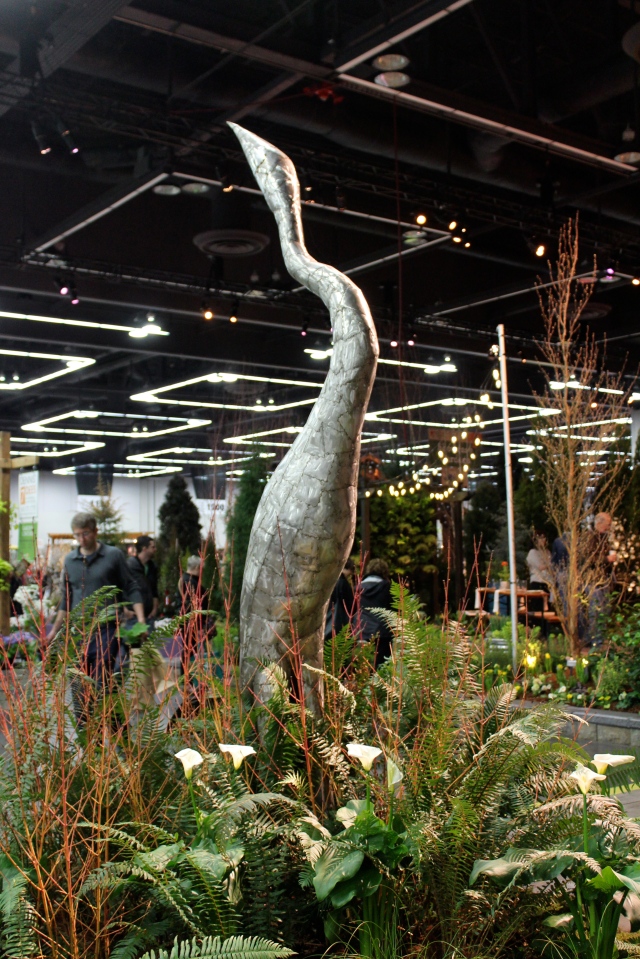 More metal, different finish. A loner among plenty of garden variety Cranes of more literal interpretation, I really thought this more abstract bird form was lovely. The planting surrounding it, with Midwinter fire dogwood, our native sword ferns and Calla lilies only added to its charm. 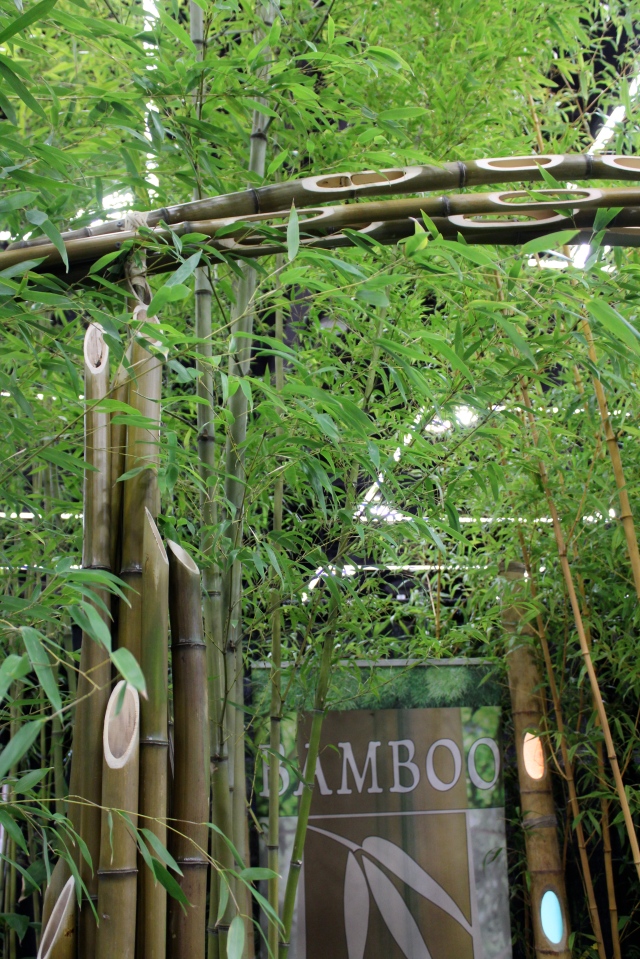 The portal into the Bamboo Garden’s display booth had these really elegant cut-outs which I thought manifested a very creative use of bamboo to its fullest potential. I’m storing that one away in the memory bank, for sure.

I can never get enough of these little Fritillarias – here surrounded by moss, and juxtaposed with unfurling glass ferns.

Both at NWFGS and here at the YGP, contorted branches were the rage. 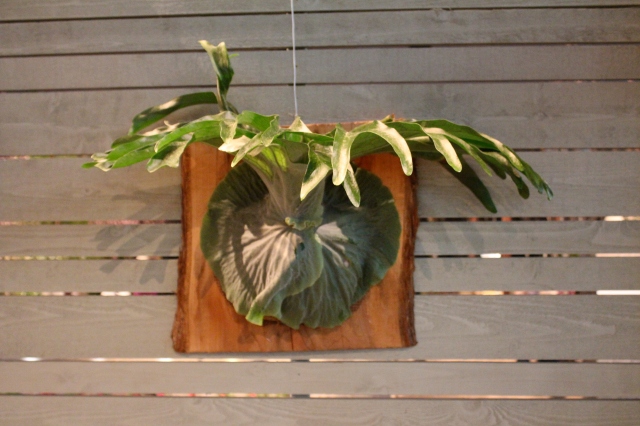 There were many ways of displaying plants at the YGP. Here is a perennial favorite of mine – a wall mounted stag horn fern. Sigh… 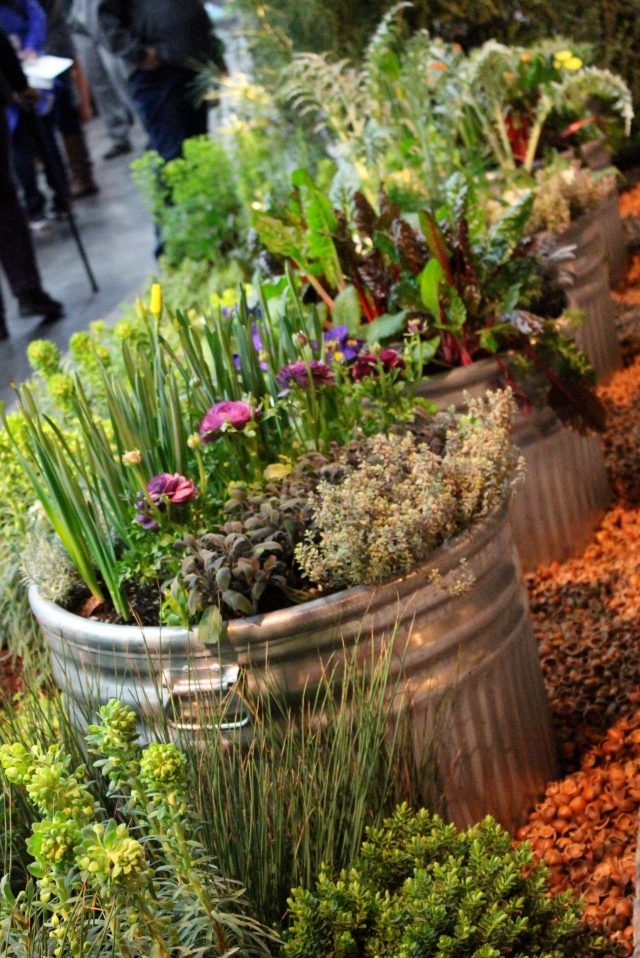 I liked the spotty texture of this pot a lot.

Dennis 7 Dees had a lovely greenhouse as part of their plant display. 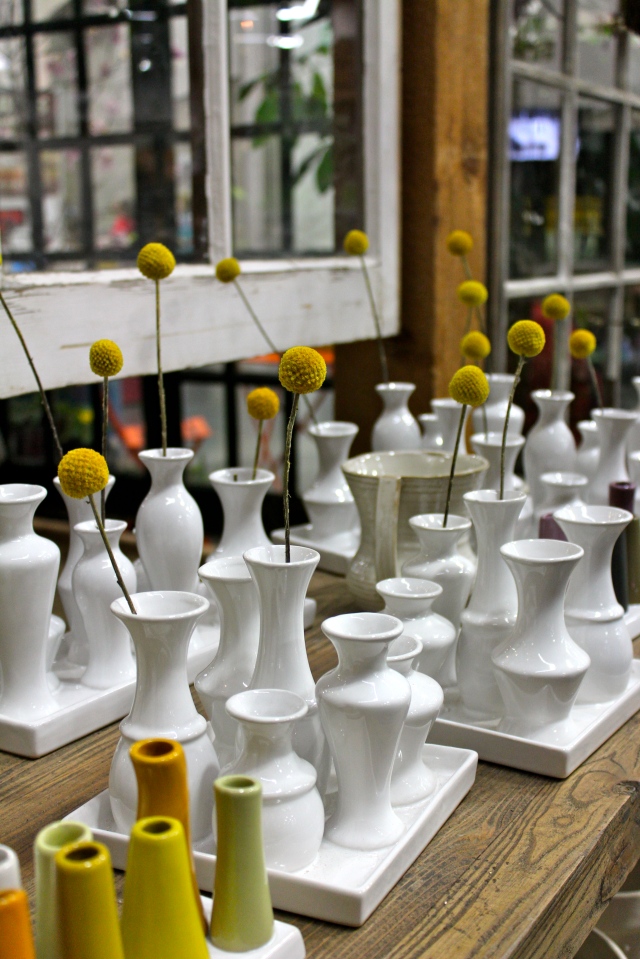 Outside of it, a collection of white vases, each sporting a single Billy Ball – or Craspedia. Simple and stunning!

A demonstration of how to make moss balls.

You can make it with just about any small plant. This one made with a Polygala caught my eye. 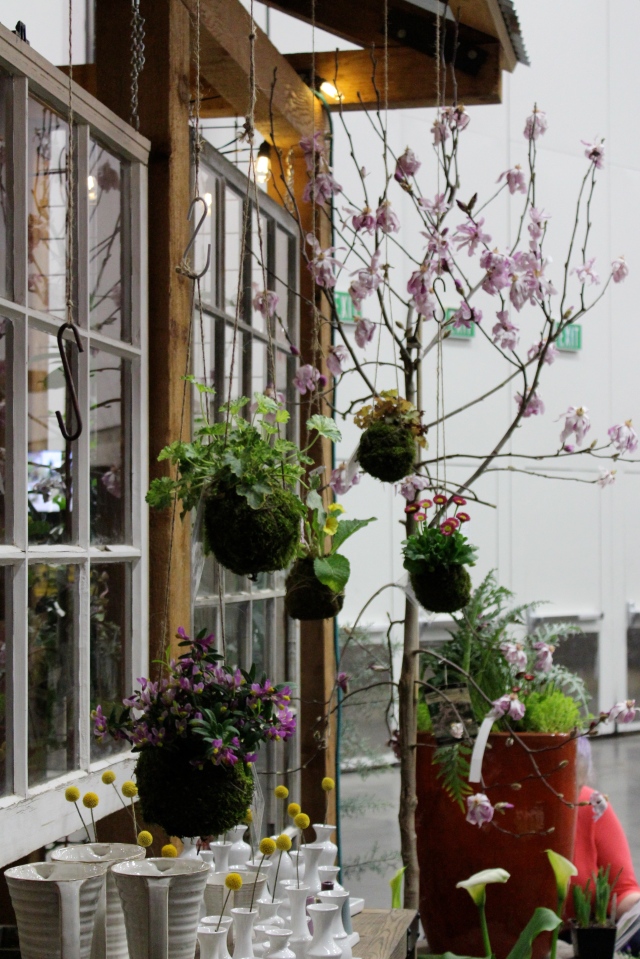 Here are a few of them hanging outside of that wonderful greenhouse. I loved how the old windows were simply hung by chains.

One display that I hadn’t expected was an organization that took care of rescued animals until they can be released back into the wild. I snapped some photos, but seeing caged animals – for whatever reason – always makes me sad, so I didn’t stay long. 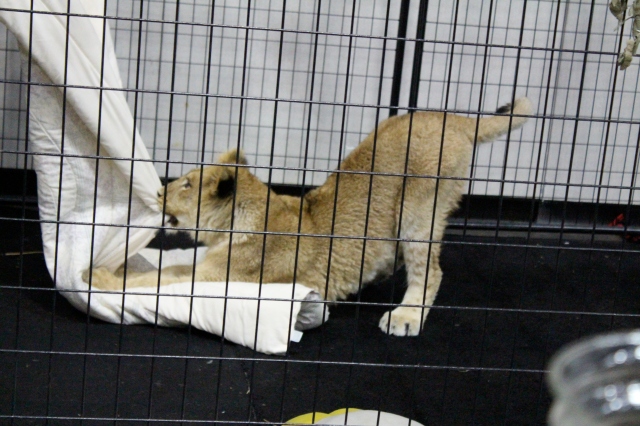 … as does this one (whose name I have forgotten), happily munching away. 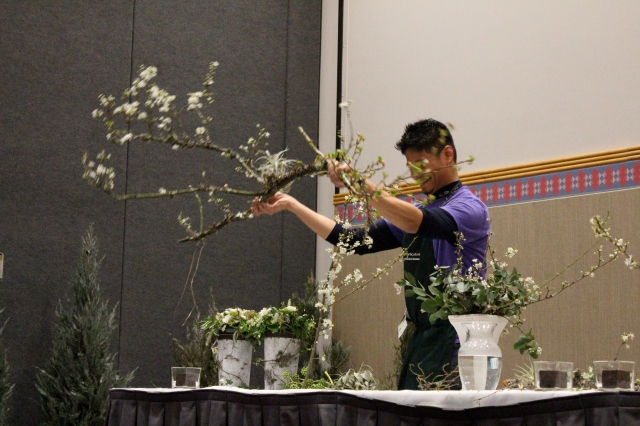 After Laura left, I spent most of the remaining afternoon listening to a few of the many talks offered throughout the day. Here is Riz Reyes talking about arranging flowers, and demonstrating how he does it. “Think of it as planting a garden”, he said. 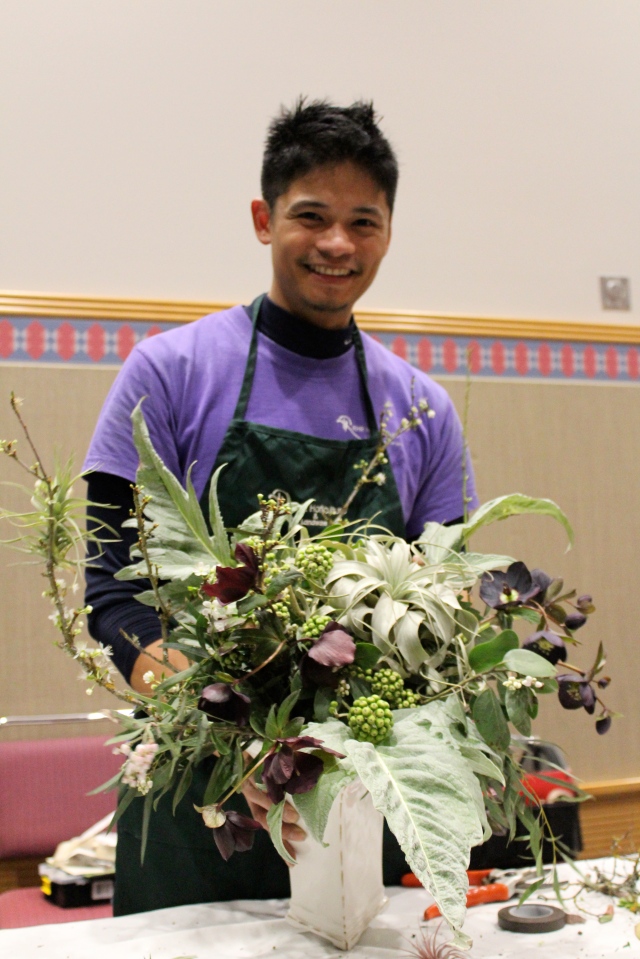 Seriously, this guy has a MASSIVE talent! 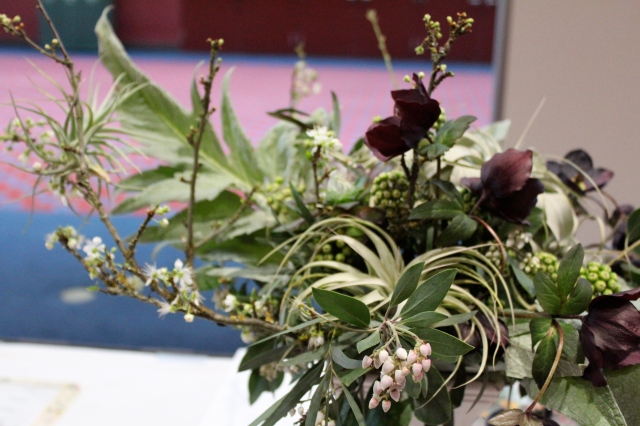 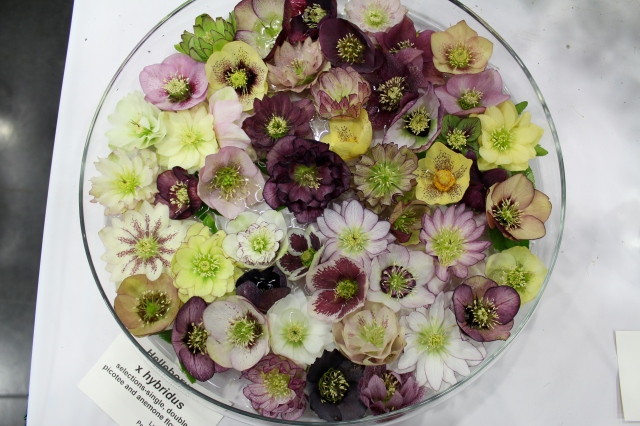 Last but not least, I always enjoy the winter blooming setup by the Hardy Plant Society of Oregon. Their shallow bowl filled with Hellebores blows me away every time.

This white-blooming Pieris made me want one. Yes, really…. I’m not kidding. What an abundance of blooms!

This Magnolia bloom isn’t bad either. In my next life, I’m going to have a white garden, and all of these will be in it. 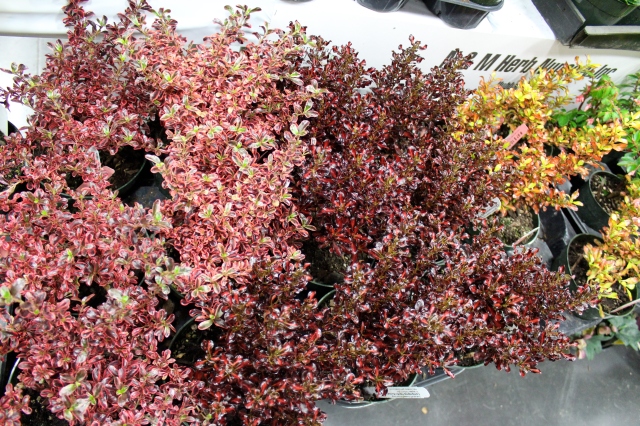 Next to the HPSO display was the Remarkable Green Market, where specialty nurseries from the area set up shop with all kinds of goodies. The range of colors of these Coprosmas from N & M Herb Nursery was fantastic. 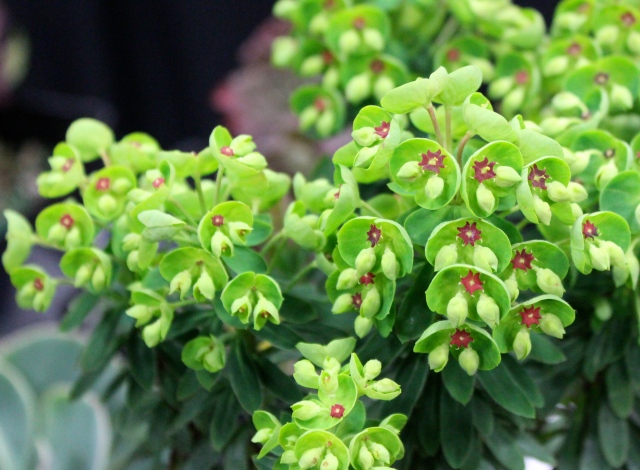 I SO have a soft spot for the red eyes of Euphorbia Tiny Tim.

So, did I buy anything? you ask… Yes, dammit, I did! I was trying so hard to be good – to no avail. It is obvious I lack all self control in these situations… These beauties came home with me: A black Pittosporum I had never seen before, a red Abutilon I have lusted over ever since we visited Shayne Chandler’s garden in September 2013, a jet-black Colocasia, a variegated Aspidistra (I have wanted one for a long time), a Nandina filamentosa, and a red hibiscus with black foliage called ‘Midnight Marvel’. Pretty awesome haul, huh? Have you bought any plants yet this year?

I was born and raised in Sweden, By now, I have lived almost as long in the United States. The path I’ve taken has been long and varied, and has given me a philosophical approach to life. I may joke that I’m a sybarite, but the truth is, I find joy and luxury in life’s simple things as well. My outlook on life has roots in a culture rich in history and tradition, and I care a great deal about environmental stewardship. Aesthetically, while drawn to the visually clean, functional practicality and sustainable solutions that are the hallmarks of modern Scandinavia, I also have a deep appreciation for the raw, the weathered, and the worn - materials that tell a story. To me, contrast, counterpoint, and diversity are what makes life interesting and engaging. Color has always informed everything I do. I’m a functional tetrachromat, and a hopeless plantoholic. I was originally trained as an architect working mostly on interiors, but soon ventured outside - into garden design. It’s that contrast thing again… An interior adrift from its exterior, is like a yin without a yang. My firm conviction that everything is connected gets me in trouble time and time again. The world is a big place, and full of marvelous distractions, and offers plentiful opportunities for inquiry and exploration. I started writing to quell my constant queries, explore my discoveries, and nurture my curiosity. The Creative Flux was started in 2010, and became a catch-all for all kinds of intersecting interests. The start of Flutter & Hum at the end of 2013 marks my descent into plant nerd revelry. I occasionally contribute to other blogs, but those two are my main ones. For sure, topics are all over the map, but then again - so am I! Welcome to my blogs!
View all posts by annamadeit →
This entry was posted in Miscellaneous, Nursery industry and events and tagged #YGP 2015, Acacia 'Cousin Itt', display gardens, edgeworthia, flower arranging, Garden Show, HPSO, judge, plant addiction, Riz Reyes. Bookmark the permalink.

21 Responses to Judgmental for a day!