Sometimes, a project takes on an element of gambling. Recently, a couple asked me to help them spruce up their parking strip. It had nice, generous dimensions (12′ x 50′), but also came with a large Black Walnut tree. Being that they were new to Oregon, and not really familiar with what grows here, I invited them to walk around the nursery with me, and point out the stuff they liked. It was fun! They both turned out to have discerning tastes, which made the project so much more exciting. They also requested mixing up any exotics with native and drought tolerant plants. After I had a better idea of their aesthetics and wishes, and we had assembled a group of plants that would work in the given light conditions, I now had to figure out if the plants they liked would actually survive under that Walnut tree.  Walnuts emit juglone – a chemical comound –  into the surrounding soil, in a process referred to as allelopathy. Allelopathy is essentially a plant’s way to bully surrounding plants into submission and hamper their growth – thus reducing their competition, and establishing its own dominance. It’s pretty fascinating stuff – you can read more about it here.

This is where we started. Two unused raised beds in the sunny end….

… and nothing but brown grass in the shade under the tree.

There are ample lists of Do’s or Don’ts available on the Internet, but several of the plants we had weren’t expressed on any of the lists. So, on some, we had to just take a chance, and do our own experimenting. Long story short, some of their choices were deemed fine, and some were exchanged for other safer bets. And, on some, we just gambled. As a general rule, a plant intolerant of juglone will die within the first few days.  Happily, by now, the plants have been in the ground for over a month, and everything is doing great!

As you could see in the photos – due to the expansive reach of the Walnut tree, the strip is mostly shady, except on one end where it is baking hot and sunny. To begin with, we added a couple of flagstone and river rock pathways to the curbside – both for ease if visitor’s parking, but also to be able to “be inside” the new plantings. In one place, the lowest Walnut branch curves elegantly upward before bending down again, thus offering a natural portal for one of the paths. We also added a few boulders. At the sunny end, we put three of them rather close together, and filled the space between them with soil, building up a kind of “planter” for our feature plant; a little dwarf Chinese Elm (Ulmus parvifolia ‘Seiju’). 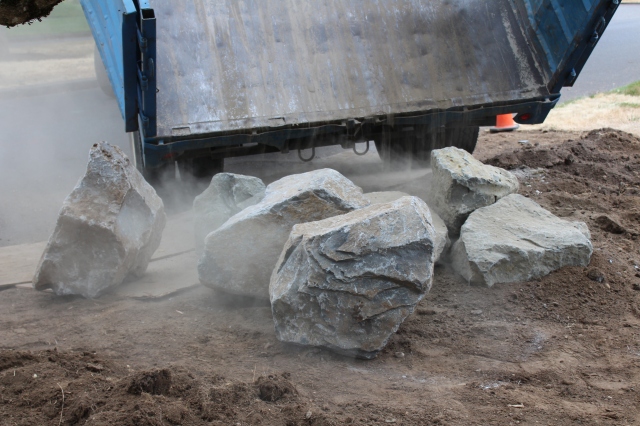 Here is the path going in under the arching branch.

Both grasses and ferns are said to be mostly juglone tolerant, so those were easy choices. (Plus, those are such great texture plants anyway, so I think most every project would benefit from including some!) Anyway, for the benefit of anyone else attempting to plant around a Walnut tree – here are some plants that work; For larger focal points for partial sun and shade areas, we chose a few interesting evergreens –  Pernettya rubra with its adorable pink berries, a Daphne ‘Carol Mackie’ for some fragrance, and the amazingly beautiful Mahonia gracilipes, with the lovely white undersides of its leaves glowing in the dark. Overall, other than Sword ferns, the natives we used include Dicentra, Camassia, and Sysirinchium (Blue-eyed grass). We also planted a ground cover rose ‘Snow Carpet’, Reineckia, Epimedium, Pachysandra, Angelina sedum, Artemisia ‘Seafoam’, Iris pallida, and Agastache ‘Apache sunset’, and Zauschneria californica. The grasses included Deschampsia ‘Schottland, Miscanthus sinensis ‘Morning light’, Boutlea ‘Blonde Ambition’, Nasella tenuissima, native Luzula nivea, and Carex ‘Evergold’. It’s only been a month since planting, but everything is already filling in quite nicely. 🙂 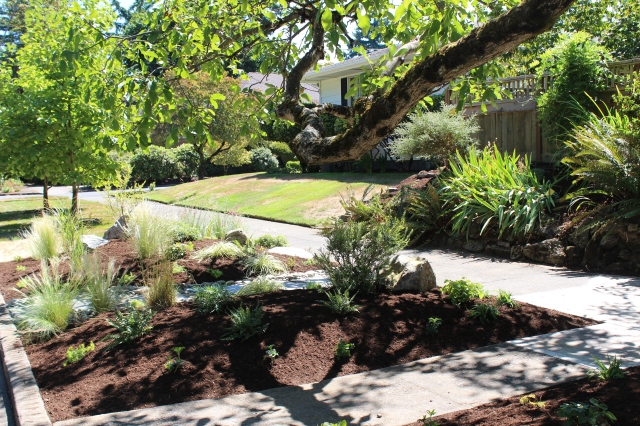 Rocks and paths in place, and everything planted. The larger shrub on the right in the foreground is the Pernettya. 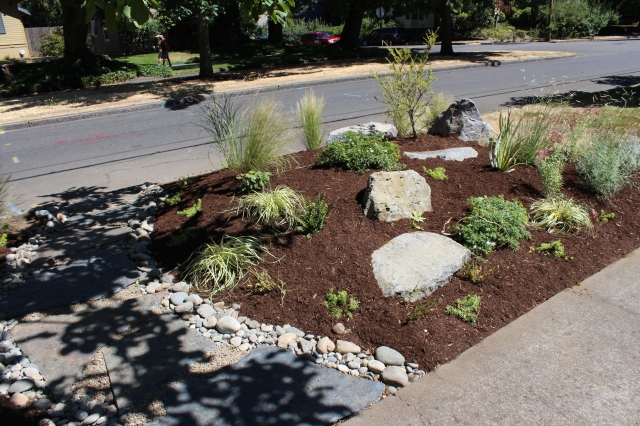 Here is a different view toward the sunny end. Grasses, ground cover roses, and of course that cute little Elm. 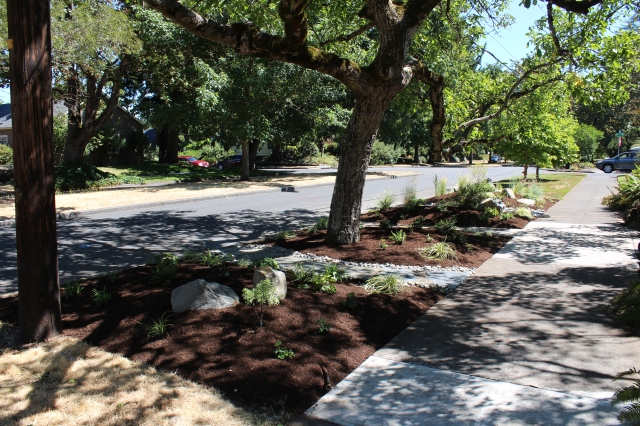 The shady end has a different feel, with ferns, Luzula grass, Epimedium, and Pachysandra. We planted a Daphne ‘Carol Mackie’ for fragrance…

… and of course that wonderful Mahonia gracilipes. Just look at the marvelous white undersides of those leaves! I think that will be a great color echo to the white edges of Carol Mackie. 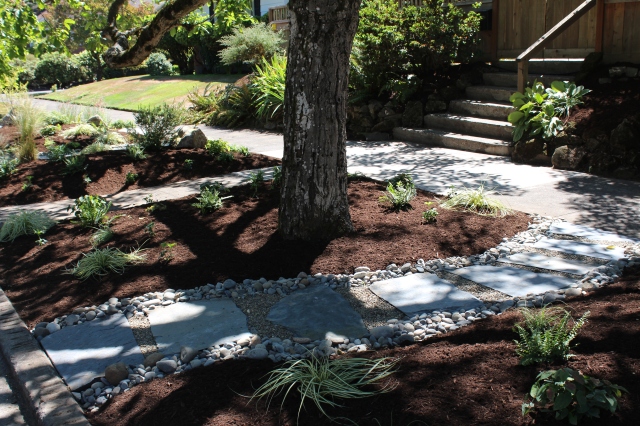 Looking back toward the sunny end from the street. Looks so much better than just brown grass – don’t you agree?

I was born and raised in Sweden, By now, I have lived almost as long in the United States. The path I’ve taken has been long and varied, and has given me a philosophical approach to life. I may joke that I’m a sybarite, but the truth is, I find joy and luxury in life’s simple things as well. My outlook on life has roots in a culture rich in history and tradition, and I care a great deal about environmental stewardship. Aesthetically, while drawn to the visually clean, functional practicality and sustainable solutions that are the hallmarks of modern Scandinavia, I also have a deep appreciation for the raw, the weathered, and the worn - materials that tell a story. To me, contrast, counterpoint, and diversity are what makes life interesting and engaging. Color has always informed everything I do. I’m a functional tetrachromat, and a hopeless plantoholic. I was originally trained as an architect working mostly on interiors, but soon ventured outside - into garden design. It’s that contrast thing again… An interior adrift from its exterior, is like a yin without a yang. My firm conviction that everything is connected gets me in trouble time and time again. The world is a big place, and full of marvelous distractions, and offers plentiful opportunities for inquiry and exploration. I started writing to quell my constant queries, explore my discoveries, and nurture my curiosity. The Creative Flux was started in 2010, and became a catch-all for all kinds of intersecting interests. The start of Flutter & Hum at the end of 2013 marks my descent into plant nerd revelry. I occasionally contribute to other blogs, but those two are my main ones. For sure, topics are all over the map, but then again - so am I! Welcome to my blogs!
View all posts by annamadeit →
This entry was posted in Projects and tagged allelopathy, Drake's, Ferns, grasses, hell strip, juglone, juglone tolerant plants, parking strip, shade, sun, Walnut tree. Bookmark the permalink.

14 Responses to The juglone challenge