Wednesday Vignette – the rise of Roseism

It’s been a ghastly week, and we all could probably use to focus our eyes on something of beauty, rather than on fiery, tear-gassed news stories. Roses are blooms with a long history – some of it excessively bloody. A popular symbol in medieval heraldry, the Houses of Lancaster and York each had a rose in theirs; the House of Lancaster’s rose was red, and that of the House of York was white. For most of the 15th century, the two families feuded over the throne of England, in something that later was to be referred to as the Wars of the Roses. 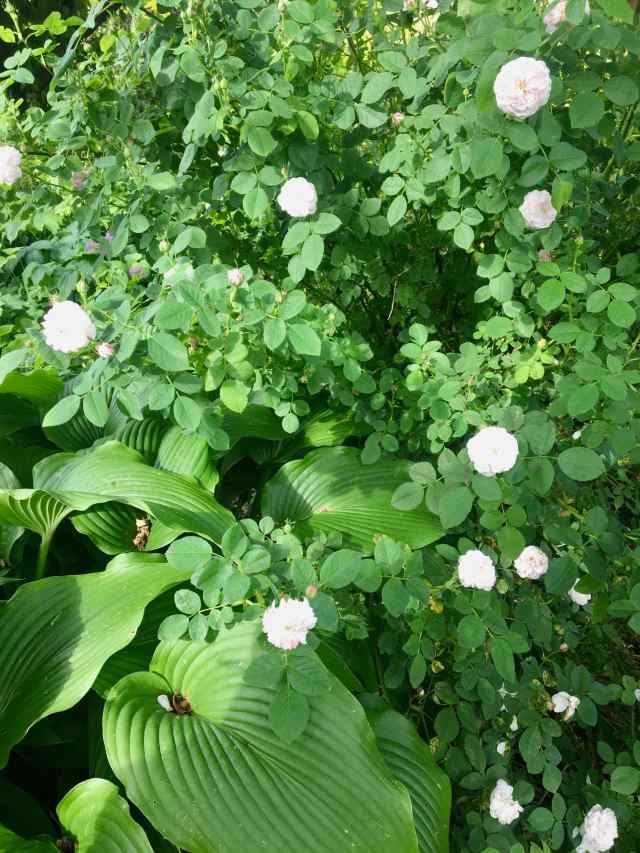 Heavenly scented Rosa Pompom Blanc Parfait in the gardens at Joy Creek Nursery. I stick my nose in this rose as often as I can – it lifts my spirits and strengthens my resolve.

The blood on our streets today are for a different cause, but it’s still a power struggle. It’s no longer red vs white – now it’s black vs white, and a much more widespread affair. Of course racism is nothing new. Remember Rodney King? (Can you believe that was almost 40 years ago? (Edited to say 30 years, as my dear fact checkers pointed out. My math isn’t always great – LOL!) Of course it wasn’t new then either… and it hasn’t really abated since. Sigh.) BUT, if there is any silver lining at all to this horrific, cold-blooded murder, it is that this time around, ALL races, ages, and genders are taking part in the global protests to this display of oppression, that resulted. The old “lines” are blurred, and the great moral majority oppose the targeted injustices that are so painfully and tragically alive and well in our society. And, lucky us – there is an election coming up, so please don’t give up. Where hopelessness flourishes, injustices thrive.

So, where does the rose come in, again? Well, we need to keep the beauty and purity of what can be in laser focus, and keep our thorns at the ready for furthering those ideas. When things look bleak, let’s inhale its magnificent perfume, and keep going. The sweet scent of roses will eventually overpower the stench of racism and hate. The Yorks and the Lancasters were indeed polarized, but I’m willing to bet the bottom strata of their society didn’t care one bit, as long as they were able to keep plowing the fields for their masters, and hopefully able to put food on their tables. Come November, we – the now polarized serfs of current society – need to prioritize the core ideas of a free democracy over those of a fettered authoritarianism, and hopefully not just blindly adhere to old party allegiances. Together we’re going to vote out racism, and sever whatever shredded ties remain with McCarthyism, once and for all. November can’t come soon enough.

Pompom Blanc Parfait is an old alba rose, introduced in 1876, when the United States was a mere one hundred years old. It’s seen a lot, I’m sure. If we don’t give up, it will see great things ahead again soon. Of that I’m sure.

I was born and raised in Sweden, By now, I have lived almost as long in the United States. The path I’ve taken has been long and varied, and has given me a philosophical approach to life. I may joke that I’m a sybarite, but the truth is, I find joy and luxury in life’s simple things as well. My outlook on life has roots in a culture rich in history and tradition, and I care a great deal about environmental stewardship. Aesthetically, while drawn to the visually clean, functional practicality and sustainable solutions that are the hallmarks of modern Scandinavia, I also have a deep appreciation for the raw, the weathered, and the worn - materials that tell a story. To me, contrast, counterpoint, and diversity are what makes life interesting and engaging. Color has always informed everything I do. I’m a functional tetrachromat, and a hopeless plantoholic. I was originally trained as an architect working mostly on interiors, but soon ventured outside - into garden design. It’s that contrast thing again… An interior adrift from its exterior, is like a yin without a yang. My firm conviction that everything is connected gets me in trouble time and time again. The world is a big place, and full of marvelous distractions, and offers plentiful opportunities for inquiry and exploration. I started writing to quell my constant queries, explore my discoveries, and nurture my curiosity. The Creative Flux was started in 2010, and became a catch-all for all kinds of intersecting interests. The start of Flutter & Hum at the end of 2013 marks my descent into plant nerd revelry. I occasionally contribute to other blogs, but those two are my main ones. For sure, topics are all over the map, but then again - so am I! Welcome to my blogs!
View all posts by annamadeit →
This entry was posted in Wednesday Vignette and tagged democracy, election, Lancaster and York, old rose, protests, racism, Rosa Pompom Blanc Parfait, roseism, Wars of the Roses. Bookmark the permalink.

20 Responses to Wednesday Vignette – the rise of Roseism